Mobilization for World War I allowed women previously unheard-of opportunities to take on non-traditional roles. Some served abroad as nurses and yeomen; others took up the ploughshares the men had traded for swords by working on family farms and with the Women’s Land Army. Traditional activities like sewing and knitting also took on new importance as the items were shipped overseas. Women also took over the factory jobs left open by the citizens turned soldiers, helping keep the American war machine rolling.

Beginning in 1915, DuPont chemical company directed all its manufacturing and production towards the war effort. Social crisis tends to trump political scruples, so the company’s recent antitrust troubles did not hinder its consolidation of a monopoly over American munitions production. DuPont Plant #37, located on the York River near Williamsburg, Virginia, was a shell-filling plant. The company’s Women’s Munition Reserve Seven Pines Bag Loading Plant was located near what is now Sandston, Virginia.

The Seven Pines and Penniman plants paid relatively high wages for hazardous work. Workers were responsible for loading TNT into ammunition shells and bagging gunpowder for shipment. Despite the potential danger, hundreds of men and women flocked to the plant in search of employment. A village quickly grew up around Plant #37 as DuPont constructed 230 houses to entice its workers to live nearby. It became known as Penniman. The population of Penniman numbered 10,000–20,000.[1]

Female workers made up most of the workforce at Seven Pines. Women of all walks of life were represented, and it was not unusual for middle- and lower-class women to sew and fill powder bags side-by-side with Virginia’s First Lady, Marguerite Davis.[2] Fashion norms also relaxed a bit as a concession to the war effort. Long skirts were impractical in factories, particularly in factories filled with flammable and potentially explosive materials. DuPont issued trousers to the woman munitions workers of Seven Pines. To maintain propriety and keep the clothing suitably feminine, the women wore “womanalls” and “trouserettes.” as they “stuffed one shell for the Kaiser.”[3]

The inscription on the metal badge housed at the VAARNG Mullins Armory in Richmond, Virginia, reads “WOMEN’S MUNITION RESERVE SEVEN PINES BAG LOADING PLANT.” Badges issued for other DuPont munitions plants took similar forms. Plant badges served several purposes: some were practical, some rather grisly. As metal withstands an explosion better than flesh, numbered badges could help identify a worker killed during a plant accident. It is probable the “68” on the middle of the badge was the identification number for a female worker. 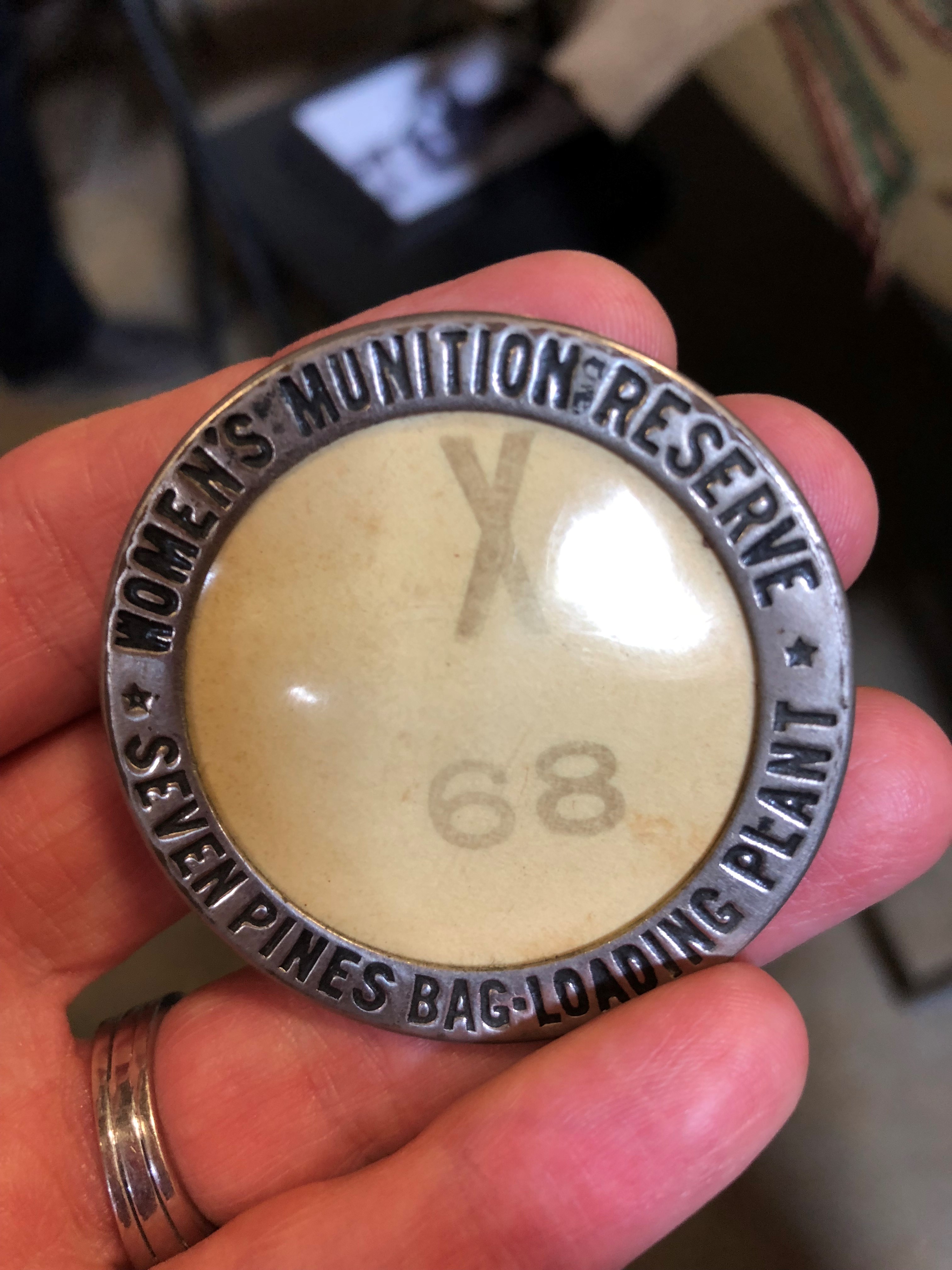 Plant badges provided a different kind of protection for male workers. Being branded a “slacker,” or man who did not serve or did not work towards the war effort, was almost as bad as being German. Wearing a factory badge showed the community you were doing your part.

The Seven Pines plant officially opened in October 1918 with a “Liberty Day” celebration. Less than a month later, Armistice rendered the plant’s work unnecessary. The Richmond-Fairfield Railway Company bought the properties originally constructed for the workers, building the foundation for a suburb for the city of Richmond- Sandston. Affordable housing and access to jobs in the city allowed workers to find employment as the nation shifted to a post-war economy.

While the Sandston community survived, community around Dupont Plant #37 did not. The Spanish flu epidemic that raged across the nation also took its toll in Penniman. The local hospital could not keep up with the number of sick men, women, and children who entered its doors. Local coroners and casket  also struggled to keep up with the dead. When Plant #37 closed its doors, the surviving families left in search of employment, in some cases taking their DuPont-constructed houses with them by floating them down the river. By the mid-1920s, Penniman had disappeared. The Women’s Munition Plant badge is tangible evidence of a place that can no longer be found on a Virginia map. While most of the women’s individual stories also disappeared, this material evidence preserves the story of another way Virginia women broke through gender boundaries to support their country and their Commonwealth. 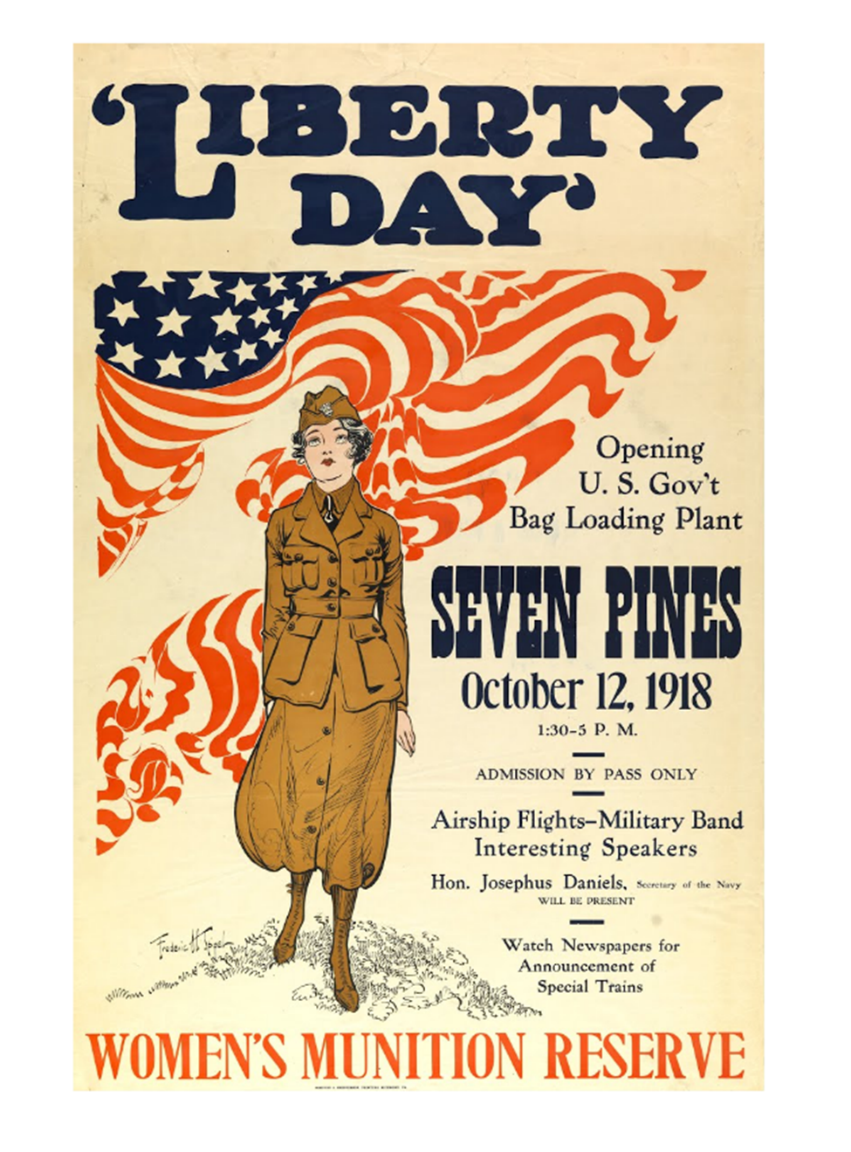 Special thank you to the readers who sent me revisions for information that was unclear in my original post. I appreciate your dedication to keeping historians accountable as we endeavor to tell the truth about the past as much as possible.

View all posts by katemschaefer